home > News > Diary > Where are the ingredients of ARITA WARE ? I went to Amakusa! ~

Where are the ingredients of ARITA WARE ? I went to Amakusa! ~

Do you know where ARITA WARE 's raw material comes from?
This time we will introduce pottery which is the main ingredient of ARITA WARE .

About 400 years ago, Choson potter Lee Young-hei found Arima in Arita, right?
If so, can you still procure in Arita-cho?

from overseas?
In the famous Jingdezhen, Czech, New Zealand and Kaolin soil, there are ingredient production areas such as pottery stones.
Meißen or Helen combines Czech and German kaolin soil and feldspar to make the best clay for our company.

In the case of Arita, pottery stone comes from Amakusa city, Kumamoto prefecture.

Until around 150 years ago there were places where I used Amakusa pottery stone and Izumiyama potter stone mixed,
There was also opinion that conservative people do not admit that they do not use Izumiyama magnets as ARITA WARE .
However, even from the Meiji 35 (1902) the exhibition (the predecessor of the Kyushu Yamaguchi Ceramics Exhibition) even made of pottery other than Izumiyama pottery
It is said that it became possible to exhibit.

There was such a thing, I wanted to see the magnet field of Amakusa once by all means.
I wanted to see where pottery stones we are using are mined.
It happened that other kilns would go to visit the magnets in Amakusa, so I accompany it.

I am going by boat from Arita to Amakusa.
I went to Shimabara in Nagasaki prefecture by taking the road passing through Kajima City and above the Ariake Sea tide receiving bank, which is said to be the famous "guillotine".
There are ferries from Shimabara to Amakusa.

The sea taken from a ferry. It is totally unlikely that only this is taken (laugh) 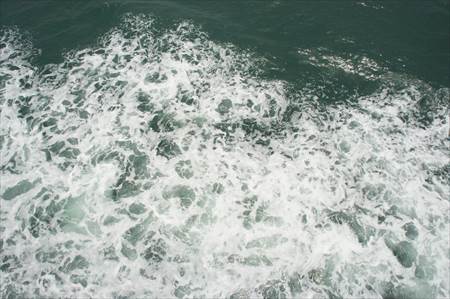 It is a really nice scenery since I came to Amakusa. 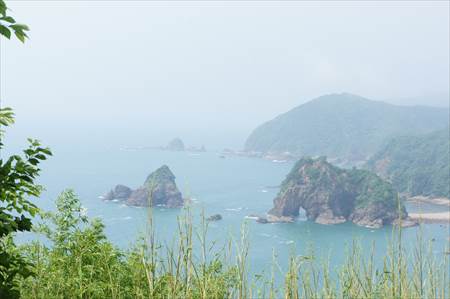 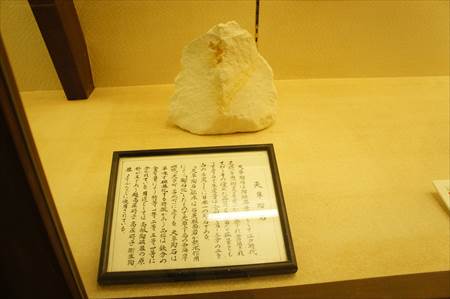 Amakusa pottery is said to have been used in 1662 by Yuji Imamura for the first time in the Hirado clan kiln.
Until then it seems that it was used as a "grinding stone" to sharpen knives.
Even now, Amakusa grinding wheels are on sale when going to the wheel stone corner at home center etc. 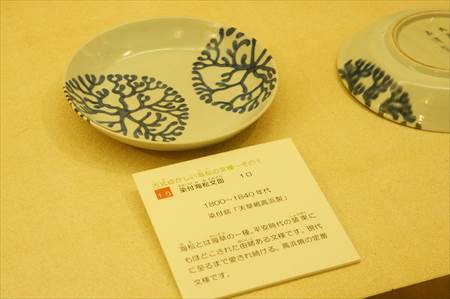 This pattern seems to be representative of Takahama-yaki.

Sea coat [Milmorn]
It is truly a pattern of seaweed just near the sea. It is also cute, feeling modern.

An interesting thing was written when reading the explanatory note.
"Takahama-yaki is not sold, only ARITA WARE yaki are sold, since raw material of ARITA WARE is Amakusa pottery stone, let's not sell porcelain stones to Arita"
It seems that there are records like such.

However, it seems that it was difficult to call craftsmen from Mikawauchi in the Hirado clan or Kameyama in Nagasaki to improve the quality of Takahama grill.
That's more than anything for Amakusa people.
It seems that the seventh generation Ueda Gen Taro Yoshinori who was also Shoya in order to create the work of the Amakusa people, has developed the industry even though he lost his personal property.

However, it seems that there were also times when Takahama Grill was specialized in mining and selling pottery stones, as the twelve generations closed.

I had a lot of opportunities to know the history of the place of burning other than Arita so I was very shocked.
Along with that, surprised also the high influence of ARITA WARE , superimposed on the present situation of Arita now
"Is it ARITA WARE that can admire people? Is high technology kept?"
It turned out to look back.

It seems that this Ueda potter stone comes from if the clay of ARITA PORCELAIN LAB also follows.

I passed through the rice fields and entered the mountains.
Through a narrow path, it was the sort of magnets that finally came.
There must be a magnet field behind this!
Before that we will also look at the old kiln ruins! 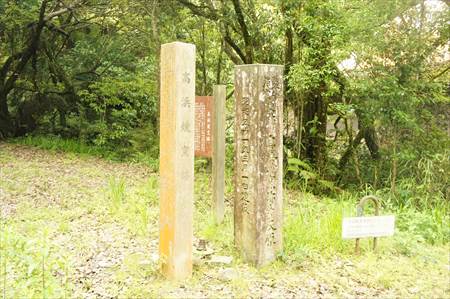 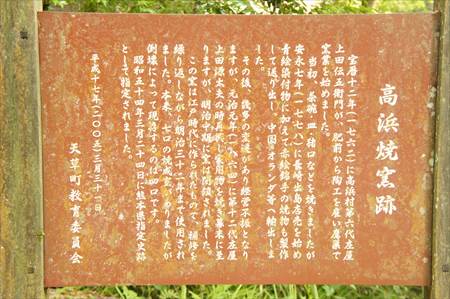 There was a trace of a kiln climbing up in the back. 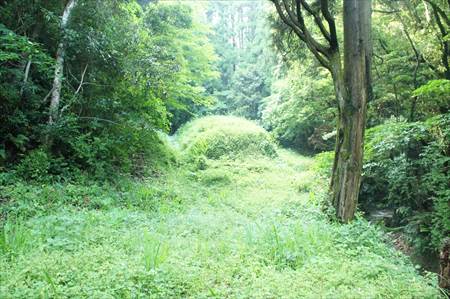 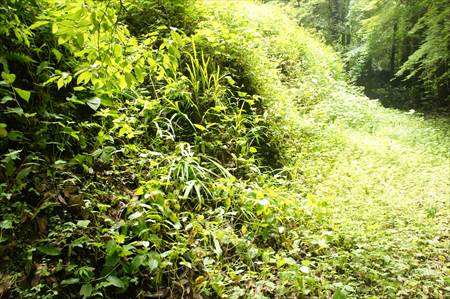 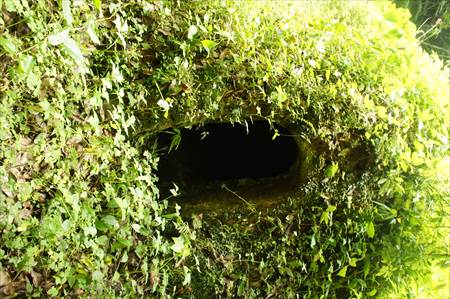 About five strands were connected.
The scaffolding was bad and I was not counting with the precise photo shoot (sweat)

When thinking that it was burning in such a mountain, it would have been difficult to carry.
Simply thought so.

Well, I also saw the climbing kiln, and to the magnet field GO!

Road pavement disappeared from the way, bumpy road.
But there are traces like tracks passed.
If the truck goes through, there is no doubt!
So believe it for 30 minutes.
We arrived!

high!
The mountain is scraped, brown background is visible.
Shockers are about to come out.

I forgot to take pictures with too much shock, but it seems that it is not a magnet field here.
It seemed to be a mining site of other soil not pottery.

There was also a ferry time, so I could not search for a magnet field again, so I dropped at the sorting place I passed.
Again the fact of shock! 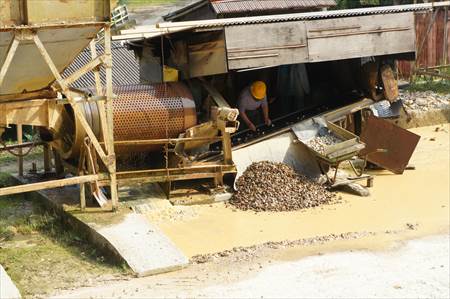 Grandma is sorting stones by hand!

Unlike Arita, Amakusa is said to have deposited pottery stones in strips.
Please image the stratum. It seems that the strata are folded like Baumkuchen.
In the case of Arita, one mountain is a pottery stone.

It seems that the mining in a pottery rock (rock) is now gone as in the past. 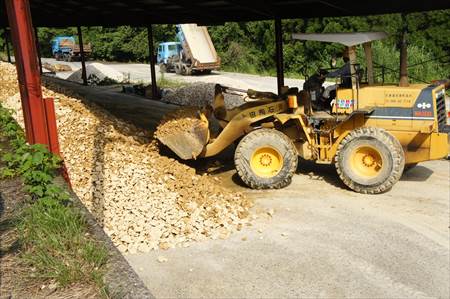 He said that he used to select small stones that had been thrown away in the past and made it into clay.
The grandma was doing that sorting.

Somehow, tears came out.
We have only seen things that became clay, but are they sorting out the raw materials manually?
Is this really Japan here in 2015?

If you visited the site of ARITA WARE
"I never thought it was so hand-made."
Tell me.

I felt the same way.
"I thought that it was somewhat manual work to screen pottery stones."

As soon the price of pottery stone rises.
I think that it can be useless if you look at the screening area, but on the other hand, it may not be easy to pass on to the product.

ARITA WARE which is handicraft in the factory.
Sort the raw materials manually.
Please use people carefully handed ARITA WARE .

"If you do not break it will not sell new ones"
Although it says as a joke, it is sorrowful to break from the creator.
Only when you use it carefully, attachment also springs up.
It is troublesome to break, not to decorate, to use it carefully, it is the most pleasing to use carefully.

Thank you ARITA PORCELAIN LAB in the future.

Refresh your feelings with pastel-colored tableware!

French page of Fb is made.

"This may be good" for snack time. 7 wonderful plates and containers

Produce time with your loved ones with a container that makes your side dishes look more delicious ...

Made In Japan Project

Notice: Undefined variable: post in /home/gold-imari/aritaporcelainlab.com/public_html/wp/wp-content/themes/arita-child/functions.phpon line186
The other day, Made in Japan project NPO corporation ...

Autumn gifts that begin with passion

Never remove it! By price: Gifts for baby gifts and gifts for internal celebrations-Part 2-

Never remove it! By price: Gifts for baby gifts and gifts for internal celebrations-Part 1-

Never remove it! By price: Gifts for baby gifts and gifts for internal celebrations-Part 1-

Founded in 1804, “Arita Porcelain Lab” is the modern brand name of the Yazaemon Kiln, which was established over 200 years ago.
It is one of Arita’s oldest and largest-scale operating kilns.
Our luxury and modern style of Arita porcelain pieces are created​ ​
one by one by handwork of skilled artisants,
taking advantage of the unique and techniques inherited in tradition of Yazaemon kiln, which evolved through countless trials.